Staffan Mossenmark (born 1961) is often seen as a boundary breaker, a person who has went his own way. Internationally, Mossenmark’s compositions have been performed at concerts at the radio and TV, aswell as around Europe as in USA, Canada, Japan, China and Australia.   Mossenmark is often hired as a lecturer and leader of workshops at art, architect and design schools both in Sweden and internationally. In Sweden, Mossenmark teaches ‘soundart’ at the Academy of Music and Drama of the University of Gothenburg and is involved in the sound research group USIT – Urban Sound Institute.   A big part of Mossenmark’s artistry and composing is the interest of our everyday sounds and the sounding things that surrounds us everyday. By composing with sounds that you can easily recognize, Mossenmark has managed to reach out to a general audience, outside the traditional music and culture audience. To communicate and invite a audience that has no special knowledge and this way try to break the borders and hierarchies, is an important and central goal. 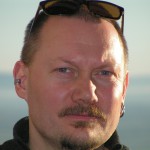 Through this interest compositions and projects has grown, pieces that naturally exceed the different artist disciplines. Compositions – sounds events such as OZONE II – Concert for 24 ice cream vans, Phony – Concert for cellphones, Song of a siren – Concert for boats, V8 – Concert for american cars, Scooter Ballet – Concert for snow scooters and WROOM – concert for 100 Harley-Davidson motorcycles.   In his “Songs from a shower cabine”, Mossenmark urged the public, through Swedish Radio, to send recordings from when they sing at home in the shower. Mossenmark then composed a choir piece made from the recordings which was later aired at Swedish Radio.   In 1999, the Cultural Centre in Stockholm commissioned a concert for motorcycles. This resulted in the concert “Wroom”, a concert for 100 Harley-Davidson motorcycles with there roaring engines, this lead by a conductor.   During the opening night of the International Festival for Performing Arts of Gothenburg, the concert IRON – Concert for bodybuilders had its first performance. 20 something oiled up bodybuilders dressed in workwear and sunglasses, wandered down Kungsportsavenyn, Gothenburg, while trailing 6 meter long concrete steel, one in each hand, everything according to the composition.

Mossenmark also compose in classic forms, then mostly chamber music and opera. The musical dramatic form has becomed a big part of the production and today this has resulted in 6 musical dramatic pieces. The first opera that Mossenmark composed was Mrs Björks destiny and adventures (1993-94) which was based on the novel by Jonas Gardell by the same name. The opera was commissioned by Vadstena Academy.   After this Mossenmark has composed the following musical dramatic pieces; “The Changeling” -98, Selma Lagerlöf, Music Theatre of Värmland, “The Fair Maidens Mountain” -01 Culture School of Lund, “But Think Of Me Then!” -02, Music in West, “A Short Time Ago” Baldersnäs/Steneby Park of Knowledge -03 and “Stjärneborg” -05 Swedish Radio P1/P2.